Any interruption due to a component failure leads to unforeseen expenses and production interruptions. Most of the failures are linked to issues where the material is subject to specific loading and environmental conditions. OCAS is involved in analysing failures, proposing adequate repair methods and remedy actions to prevent failures from occurring again. We have assembled a multi-disciplinary task force to address the rising demand for services related to failure analysis, engineering critical assessment, fit-for-purpose analysis and asset integrity and reliability services. Discover this recent case. 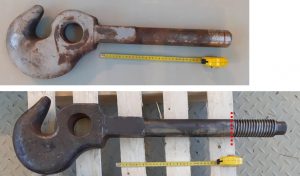 Top: broken towbar, below: similar towbar without defect. Red dotted line showing the failure location where the other towbar broke.

The broken towbar was investigated using optical and electron microscopy. Hardness measurements were carried out to check potential local hardening/softening. Cross sections were made, and the microstructure was compared with a similar towbar that had been in use for approximately the same time but showed no signs of early failure.

A combination of several factors contributed to the failure of the towbar. The fracture initiation occurred at the thread core at the end of the serrated area. The coarser grain microstructure shows poor fracture resistance. Strain of spring package to tighten (see image below) at installation, was too high causing shock load. 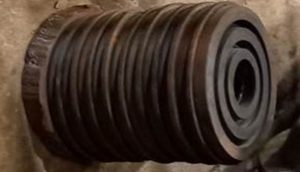 When using rubber spring packages, tighten the nut without compressing the rubber. In case of sudden tensile load of the hook, the rubber can be compressed over a longer distance and the shock will be absorbed more effectively.

Browse these related cases and learn how OCAS can help.

“Our dedicated OCAS team offers a versatile skill set in welding, corrosion, fatigue, wear and fracture. We are confident we can add value by supporting our customers in their asset reliability and structural integrity efforts.”