As several industries - such as onshore and offshore wind - are developing ever larger structures, materials and components are pushed to their limits. Conventional materials and production techniques are replaced by stronger alternatives that should perform better. In many cases, proving increased performance requires experimental validation testing. Hydraulic test equipment fit for testing large-scale components generally takes time and comes at a considerable cost.

To accelerate the testing speed of such large-scale critical components, OCAS has developed a unique test rig CRONOS for accelerated fatigue testing. Using our patented test technology, OCAS can offer accelerated fatigue tests on a wide range of components and structures. Typical testing speeds are between 20 to 40 Hz for test pieces weighing more than 10 tonnes. This is considerably faster than hydraulic test set-ups for large structures which have a typical testing speed of about 1 cycle per second. This means that a fatigue test taking a complete month in a conventional test rig can be completed in one day by using CRONOS.

During the fatigue test program on jacket nodes in the framework of the JaBaCo project, OCAS demonstrated the ability to subject a complex welded structure with a wide variety of load cases in the CRONOS set-up. The set-up allows applying linear reciprocating loads e.g. to load a specimen in- or out-of-plane; combined ‘circular’ loads where a rotating force vector is equally loading the complete circumference of the tested component and also complex multi-axial loads that allows a different load amplitude in the in- and out-of-plane loading modes.

Test samples are being thoroughly instrumented to measure global deformation and local strain levels. Next to that different state-of-the art tools are being used to measure crack initiation and propagation. 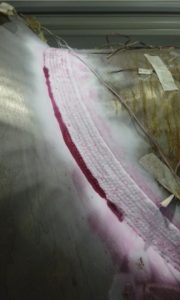 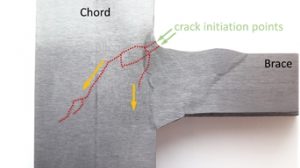 Hence, while structures are being designed ever larger, OCAS can test them faster to validate they are better and stronger.

“While critical structures are being designed ever larger, OCAS can test them faster to validate they are better and stronger.”