The shift to deeper waters and larger wind turbine generators requires optimised jacket foundations. Through a better understanding and accelerated testing of a large number of manual and automatic welded nodes in an industrial manner, the objective is to upgrade the fatigue curves for offshore jackets structures enabling a reduction in weight, CAPEX and installation costs.

In offshore wind applications, there is an increasing trend for higher wind turbines with a larger installed power. As a consequence, the dynamic loads transmitted by the windtowers towards the subsea supporting structures are getting more severe. To validate the designs and welding methods for offshore structures, full-scale fatigue tests are required. During these tests a full-scale weld is subjected to a number of cycles (typically several hundreds of thousand up to millions of cycles). Using conventional testing methods with hydraulically actuated machines, tests can be carried out at 1 cycle per second or below, resulting in fatigue tests that last for weeks.
OCAS has a newly developed efficient testing method that allows for accelerated testing of these structures at frequencies up to 40Hz. This means that one million fatigue cycles can be performed in only 7 hours of actual testing time. 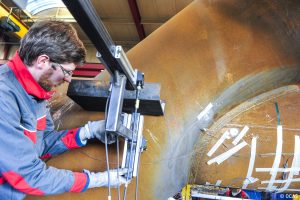 The accelerated loading is obtained by using resonant fatigue principles in a test rig called CRONOS – Continuous Resonant Oscillating Node test Set-up. In this test rig the welded node is excitated using an excentrically rotating mass. When the rotational speed of the mass is brought close to the resonance frequency of the welded node it will come into resonance.

This new testing method requires up-front optimisation of the test specimen so that it has the desired resonance properties. This is exactly where the combined numerical-experimental expertise of OCAS comes into play.

“We feel confident that the use of this test rig will provide us with the necessary data to upgrade the fatigue curves.”

Related to 'Fatigue testing of large-scale welded structures made efficient'