Since the discovery at the end of the 19th century of low expansion Fe-Ni alloys by Charles Guillaume, these alloys have triggered a lot of breakhtrough material science research. In his 1920 Nobel Prize lecture, Guillaume described the behaviour of the Fe-36% Ni alloys, now known as INVAR, as “an unexpected anomaly (...) which was a direct manifestation of the struggle between the various states of iron”.

Almost a century later, many models have been proposed on this anomolous behaviour and although there is still debate on a complete theory, it is clear that the anomalous behaviour is the result of a balance between the normal thermal expansion arising from the lattice vibrations and an anomalous contraction related to the alloy’s magnetic properties. Indeed, around 36 wt% Ni, a strong deviation from the average magnetic moment in the Slater-Pauling curve (which gives the magnetic moment as a function of the electrons per atom) is observed. First principle calculations have meanwhile confirmed the possible presence of a low-spin low-volume state and a high-spin high-volume state.

More interesting however, is the history of the discovery itself.  Triggered by a conference on Weights and Mesures in Sèvres in 1889, Guillaume set out to find an alloy suitable to propagate the metric unit around the world.  He described his studies as ‘guided by strokes of good luck’ although in fact one could think of his work as one of the earliest examples of combinatorial metallurgy.

Together with some Master students of Ghent University, OCAS decided to re-assess the INVAR effect by using combinatorial research methodology. In this work, the case study of a combinatorial assessment of the well-known Fe-Ni-Co system is described in order to challenge the methodology in terms of accuracy and sensitivity.  The complete set experimental data, consisting of 21 different Fe-Ni-Co alloys, was obtained in two 8-hours working days using a small scale cold crucible levitation melter and a dilatometer.

The alloys were prepared by melting in a cold crucible levitation melter. After melting, the samples were quenched in a cooled Cu-mould.

The thermal expansion coefficient of the different alloys was measured using a dilatometer. Samples were cut directly from the cast parts. No additional surface preparation was needed. The obtained dilatation data were processed using a Matlab script calculating the derivative of the dilatation curve with linear regression in a 5K window, providing in all cases a R2 of at least 0.90. 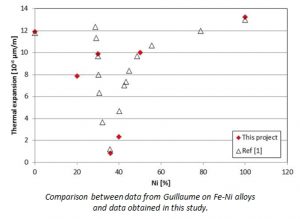 When looking more in detail to the thermal expansion curves of the INVAR-, SuperINVAR- (63% Fe, 32% Ni, 5% Co) and KOVAR-compositions as a function of temperature, the expected disappearance of the INVAR effect above the Curie temperature can be clearly seen. By applying a sigmoïdal curve fitting, the Curie temperature for three alloys was determined as the root of the second derivative and proofs to be in good agreement with literature data. 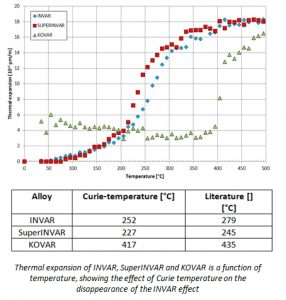 Using a combinatorial approach based on a simple experimental procedure, it was possible to re-assess the Fe-Ni-Co system in general and the INVAR-, KOVAR- and SuperINVAR-alloys in particular with a good accuracy and in high-throughput mode.

“This assessment provides confidence that obtaining data with this method on less-known systems is possible and reliable.”