Transformers typically emit a low-frequency humming noise, which can be a major obstacle for their use in urban areas. This acoustic noise is caused by mechanical vibrations of the magnetic core of the transformer, as a result of magnetostriction in the electrical steel laminations and magnetic attraction forces between the laminations in the corner joints. To predict the level of vibration, a magneto-mechanical modelling approach was developed and evaluated using experimental results.

OCAS has gained a wide experience in advanced finite element modelling of all types of electrical machines thanks to close collaboration with customers from both automotive and industrial markets. Today’s numerical models developed by OCAS are specifically fine-tuned to include accurate descriptions of the magnetic properties of electrical steel, both in its as-delivered state but also taking into account the effects of machine production processes. The activities are always based on advanced material characterisation in our laboratory to improve and refine the numerical modelling. Therefore, the effect on performance from production steps such as punching and stacking can be more accurately predicted.

Our latest developments in transformer modelling continue this approach of combining our knowledge in characterisation, modelling and production technology. 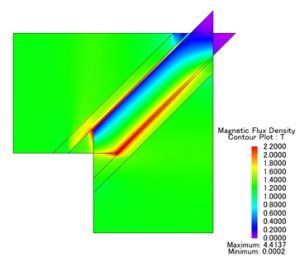 Firstly, magnetostriction data of the electrical steel was obtained using a laser vibrometer technique, whilst other magnetic properties were also measured. Then, a three-dimensional magnetic model of a transformer stack was developed in the commercial software package JMAG, paying specific attention the accurate modelling of the corner joints which are generally a major source of vibrations. Due to the requirement to include the 10 µm interlaminar airgaps in the model to accurately predict magnetic attraction forces between laminations, a very fine mesh and thus large model size were obtained that could only be solved using significant computer power and parallel processing. The field calculations in the magnetic model then allow for the derivation of magnetic and magnetostrictive forces on each individual node of the mesh, thus enabling the calculation of mechanical vibrations in a corresponding mechanical model of the transformer built with the Abaqus software.

The methodology was assessed through comparison with experimental results that were taken on a number of model transformers with different stacking techniques, including both Single-Step-Lap (SSL) and Multi-Step-Lap (MSL) corner joints. Vibration measurements on these transformers were carried out in our laboratory under various loading conditions. Good agreement between measured and predicted in-plane vibrations was observed. The modelling also demonstrated the effects of interlaminar friction and the clamping arrangement of the stack, which appeared to have a significant influence on the stiffness and out-of-plane vibration levels. Thanks to this project, our understanding of vibrations in transformer cores was significantly improved.

“OCAS has gained a wide experience in advanced finite element modelling of all types of electrical machines thanks to close collaboration with customers from both automotive and industrial markets.”