OCAS is developing methodologies to allow machines to analyse images from microstructures, based on artificial intelligence principles. The objective of this work is to improve our understanding of the relationship between processing, structure and properties of steel. From the investigations that we are pursuing, an example is given here which uses a two-point statistics method to detect patterns in the image that can help to classify the image and predict the yield stress of the material.

Image processing using artificial intelligence is a rapidly evolving discipline, thanks to the increase in computing power and the availability of large amounts of visual data. This is leading to the development of new algorithms and software tools. OCAS has been applying some of these techniques to assess the potential for correlating microstructure images with material processing and/or properties.

As images contain many pixels, each with their own colour value, a first step in the machine learning process is the extraction of useful features from the image. These features can be either based on physical phenomena, such as grain size or volume fraction of precipitations, or purely on mathematical or statistical derivations such as typically used in computer vision technology. As this process usually still results in a large number of features, feature extraction is often followed by a principal component analysis (PCA), which condenses the information in only a few parameters. From this analysis, it is often already possible to visually detect correlation between these principal components and mechanical properties. As an example, the figure below shows the first three principal components of eight images that were taken from different steels, and where the features were extracted using an analysis based on two-point statistics. The measured yield stress of the materials is also given on the figure, showing that the PCA groups the materials according to the property of interest. 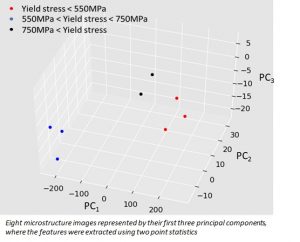 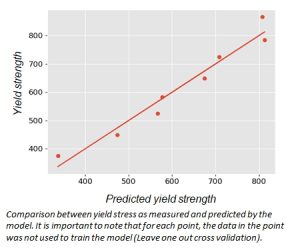 Given the reasonably good results that are currently being obtained by methodologies as the one described above, OCAS is hopeful that a tool can be developed that is not only as good in microstructure classification as our human experts, but may even pick up patterns in microstructures that are otherwise not detectable.

“Thanks to the large amount of data that has been collected over the years and our in-house capabilities regarding data science, we are in a good position to develop statistical methodologies that will give more value to our experimental work and speed-up product development.”