When bending a steel sheet, both elastic and plastic deformation occur. After removal of the load, both the bend angle and the bend radius change. Therefore, OCAS provides guidelines to help customers achieve the desired bend angle after load removal.

Much more than just bending

Bending is the main deformation mode for heavy gauge, advanced high strength steel grades. Therefore, OCAS does not only study the bendability of these grades, but also investigates other aspects of the bending behaviour. This is done through extensive experimental test campaigns in the lab, but also by means of FEA (finite element analysis) studies. FEA is a powerful tool making it possible to study the effect of different parameters on the bending behaviour. Furthermore, FE simulations provide more insight in the deformation process and help explaining experimental observations. Such studies typically result in general guidelines and recommendations that we can share with our customers.

The bendability is expressed as the minimum guaranteed bending ratio, i.e. the smallest possible bending ratio for which no cracks can be observed by visual inspection. It is assessed through lab scale V-die or air bending tests during which the material is bent to either 90° or 180°. 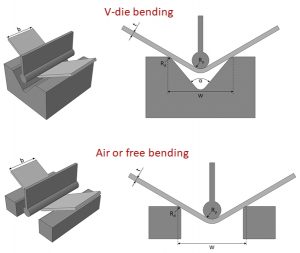 Due to the anisotropy, introduced during rolling, the bendability is direction dependent. Most steel grades show better performance when the bend line is parallel to the tranverse direction (RD bending) than for the case in which bending occurs along the rolling direction (TD bending) 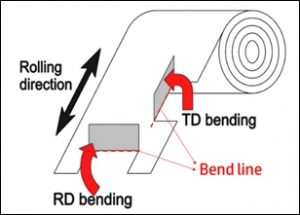 Two other important aspect are the required bending force and springback. Obviously, the required force increases with increasing material strength, sheet thickness and sheet width. However, using a larger punch radius or enlarging the die width will reduce the bending force. 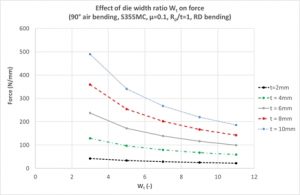 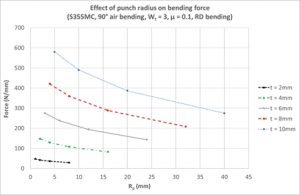 Springback refers to the phenomenon of elastic recovery after load removal. When bending a steel sheet, both elastic and plastic deformation occur. Furthermore, the induced strain varies over the sheet thickness. After removal of the load, part of the elastic strain is being recovered. Consequently, both the bend angle and the bend radius change. Therefore, it is necessary to overbend the sheet to achieve the desired bend angle after load removal.

Springback is affected by many factors. The phenomenon is more pronounced for high strength, thin gauge materials, but enlarging the punch radius or die width will also result in more springback. 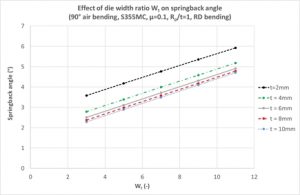 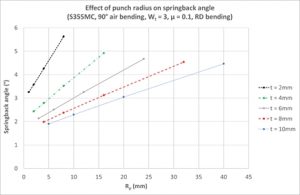 “OCAS assists customers in their production process to achieve the desired bend angle after load removal, even for heavy gauge and high strength steel grades .”

Related to 'Bending the rules?'